The extensive green area of ​​the Park Güell presents natural values ​​and a diversity of species that make the visit very attractive. Thus, in addition to the cultural and architectural tourism related to the work of Gaudí, there are many places and itineraries for discovering urban and forestry in the park.

The place which is now Park Güell used to be known as the Muntanya Pelada[Bare Mountain], because of its barren land. The botanical studies carried out on the site indicate that the original vegetation consisted of holm oaks, viburnum and mastic in its hollows and Aleppo pine and thickets of broom, gorse and false-brome on steeper, drier slopes.

For a long time it was an agricultural area with vineyards, olive groves and fruit orchards. It was all dry-farming land, as the soil was shallow and there was little water available. The area of the park closest to El Carmel hill still has some plots and terraces for cultivation which recall this agricultural past.

The land was progressively abandoned due to difficult access and working conditions, its low productivity and the onset of phylloxera, in the case of vineyards. Furthermore, the wealthier residents of nearby towns (Sant Gervasi de Cassoles, Gràcia, Horta, etc.) built second homes and summer houses on the nearest hills.

The only known written record on the Park Güell plantations, drafted by municipal experts when the City Council bought it in 1921, speaks of plantations of carob trees, olive trees, pines, various fruit trees (such as almond trees), acacias, oleanders, she-oaks, cypresses and cedars. It also describes other species, including geraniums, boxwood, wisteria, European fan palms, agaves, prickly pears, and mastics. In total, there were around 3,300 trees, of which over 2,200 were pines, mostly small ones.

As a footnote, it should be said that in 1900, at the start of building work on the park, the remains of fauna Pleistocene animals were found, including rhinoceros, elephants and deer. These specimens are displayed at the Barcelona Museum of Natural Sciences.

Throughout the 20th century, starting when Barcelona City Council bought Park Güell, various contributions to the park's gardens were made, although there were no clear criteria for continuity. During the 1960s, a number of Aleppo pines and shrubs that were resistant to dry conditions were planted in the mountain area, which gave the park its current wooded, semi-forested appearance. However, these pines were planted in the same places as many olive and carob trees, which were partially choked out.

The high winds of 2009 blew down a number of trees —especially pines, which took all kinds of plants with them when they fell—, and the snow in 2010 also damaged a lot of other vegetation. This provided an opportunity to apply new planting and plant-management criteria:

There are a wide variety of plant species in the gardens, including olive trees, oaks, pine trees, carob trees, brooms, magnolias, wisteria and aromatic plants, such as rosemary and lavender.

The park's woodland is predominantly dense areas of Aleppo pines, sometimes mixed with stone pines. In the valley you will also find carob, olive and almond trees. The shrubs are as one would expect for a lowland forest, including mastic trees, viburnum and other introduced species, such as pittosporum and laurel.

Loss of plant cover and soil erosion are sensitive issues in the park, and in specific locations this is related to excessive trampling by visitors. Some actions are therefore taken to protect and restore the soil, as well as conserving vegetation in the gardens and natural areas.

Ecological gartening in the park

As in all other city parks, gardens and green areas, Barcelona City Council applies a system of ecological gardening in Park Güell that favours natural ecosystem processes.

Conditioning factors such as the Mediterranean climate —with dry summers and a lack of water—, and the characteristics of the soil, must all be taken into account when choosing the most appropriate species.

The area formed by the hills of Creueta del Coll (Creueta del Coll Park), El Carmel (where Park Güell and Carmel Park are located) and La Rovira (Guinardó Park) constitute one of Barcelona's large green and woodland areas that has traditionally been considered as a geographical unit: the Tres Turons Park.

Barcelona's high population density and the modest size of most parks and gardens make the Tres Turons Park one of the city's most significant natural areas —along with Montjuïc and Ciutadella—, as it carries out ecological functions that are vital for the city's environmental quality.

Its location, adjacent to the Collserola mountain range, means that for some animal species, this area forms an important habitat in their life cycles, often as a means of getting from one place to another. This is the case of some butterflies and birds, which are able to move around easily. 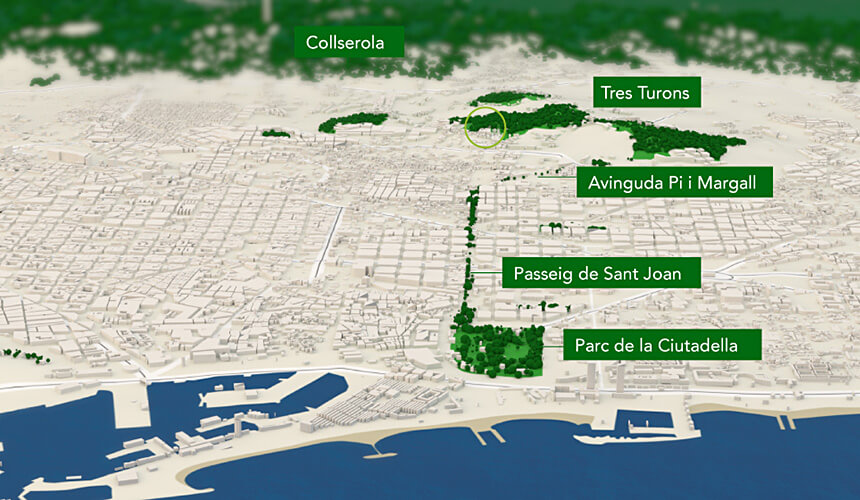 However, where parks, green areas and natural areas have no continuity, amphibians, reptiles and mammals can become isolated and find it difficult to reproduce or even survive. In the end, this causes a reduction in the variety of fauna and urban biological diversity.

For this reason, creating natural pathways inside the city, which connect different green areas with the nearest natural systems —something known as green corridors—, favours the movement of these animals. Specifically, the Tres Turons Park is located within the Ciutadella-Collserola green corridor, which has not yet been completed.

As a green area that forms part of the Tres Turons Park, Park Güell constitutes an urban nature reserve. The size of the park, the variety of its gardens and green areas and the planting criteria applied are all factors that help to attract and enrich its biodiversity.

There are over 17 hectares of green areas, which are open to everyone and possess a natural value and diversity of species that make them very attractive for visits and discovery itineraries . Therefore, in addition to cultural and architectural tourism, visitors can also include woodland and urban nature tourism. The park's most abundant tree is the olive, and some of them are extremely old.

As the degree of connectivity with Collserola and other city green areas increases, also attracts all kinds of fauna as they can find food and shelter, somewhere they can live and reproduce. In certain areas of the park, structures have also been installed to create new habitats and favour the presence of a wide variety of species (nesting boxes for insectivore birds and bats, insect hotels for solitary bees and wasps, etc.).

Certain species that are sensitive to pollution have also been detected in the park —including some lichens—, and the abundance of birds and butterflies are an indicator of good environmental quality in the park and its surrounding area.

What species can be seen?

An itinerary located near the Coll del Portell entrance gate, which allows you to enjoy the characteristic flora and fauna of the park and its surrounding area, away from the normal tourist circuits. It is 195 metres long and the woodland around it covers an area of one hectare.

Various interesting plant species have been planted all along the route, including Mediterranean shrubs, such as strawberry trees, Italian buckthorn, Common hawthorn, turpentine trees or mastic trees, laurustinus, chaste trees and red valerian, among others.

There is a gritted path prepared to collect run-off from the mountain, which then connects to the drainage system. This avoids waterlogging and damage to the path from heavy rain. It connects Passeig de les Palmeres with the Les Llàgrimes path and Placeta Moragues.

This is a former nursery where the species planted in the rest of the park were grown. It gets its name from a donation of trees made by the Austrian government, on the occasion of the "Vienna in Barcelona" exhibition in 1977.

The Austrian ambassador was a fan of the park and initiated the procedure for twinning Austria with Barcelona. On this basis, they exchanged trees for several years. Many of them died, as they were high-altitude trees that could not adapt to the Mediterranean climate, and it was decided to plant the last tree, a Prunus avium, which now evokes that period.

In 2012, the lawns were removed and replaced by groups of plants with various blooming periods, aromatic plants, etc. to commemorate what used to be a flower nursery.

A “Hotel” for insects

An “insect hotel” has been installed near the biodiversity itinerary. This is a structure where solitary bees and wasps can nest.

These insects carry out important ecological functions, as they take part in pollinating plants and the biological control of pests and diseases in gardens, something which reduces the use of phytosanitary products.

They often have difficulty in finding places to nest in urban areas, and the park offers them the things they need to complete their life cycles. They are also an indicator of good environmental quality of the air in the park and its surrounding area, as well as reducing reliance on phytosanitary products.

Although gardening is a major influence —with the consequent presence of various exotic species—, the prevailing humid conditions have favoured the presence of species such as the common hawthorn and oaks, indicating that this small area was colonised a long time ago by holm oaks.