Conservation, restoration and maintenance work on the park and its surroundings

Park Güell's historical, architectural and artistic uniqueness was recognised by the Spanish state in 1969, when it was declared a Monument of Cultural Interest.

The United Nations Educational, Scientific and Cultural Organization (UNESCO) went further in 1984 and declared it a World Heritage site, distinction awarded to all natural areas and cultural assets of great value around the world that must be protected in order to guarantee their conservation, so that future generations can continue to enjoy them.

This mission could not be carried out without the constant work of preserving, restoring and protecting these cultural assets.

Actually, we are repairing the hole in the paving near the Pòrtic de la Bugadera (the Laundry Room Portico), caused by the fall of two trees during Storm Gloria in 2020. This work is scheduled to finish by the end of the summer.

While we are working on the recovery of the modernist railing that used to stand above the square, presiding over all the stone palm trees. We will be able to reproduce this railing thanks to the old photographs of the park held by the Heritage department.

All these initiatives are essential improvements, and are a part of the efforts to preserve the heritage of the park.

Neither visitors' experiences nor the panoramic views of the city will be affected by these works.

In the area around Park Güell, more specifically at the end of Carrer de Sant Cugat del Vallès, between Carrer de Larrard and Carrer Sant Josep de la Muntanya, works to create a children's play area are currently under way. The area will include a relaxation area outside the play area enclosure, with appropriate street furniture and new lighting.

The works will result in a new service and space for relaxation not just for children but also for all local residents in general.

The play area, which has also received funding from the return of the Park Güell tourism legislation, is expected to be completed in January 2022.

These improvements are framed within the Works Plan for Architectural and Natural Heritage and the Area Surrounding Park Güell, after being commissioned by the Government Committee of the Barcelona City Council. Concretely, green light was given to 10 projects, which comprise part of those managed by B:SM and commissioned by the City Council within the framework of regulating entry to the grounds, and driven forward jointly with the Ecology, City Planning and Mobility Division, and the districts of Gràcia and Horta-Guinardó. 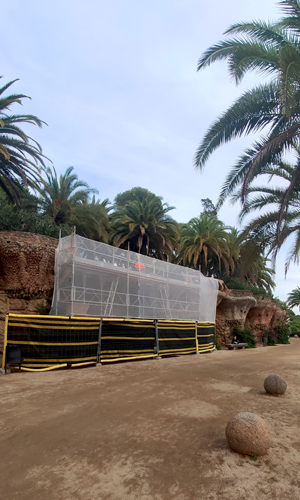